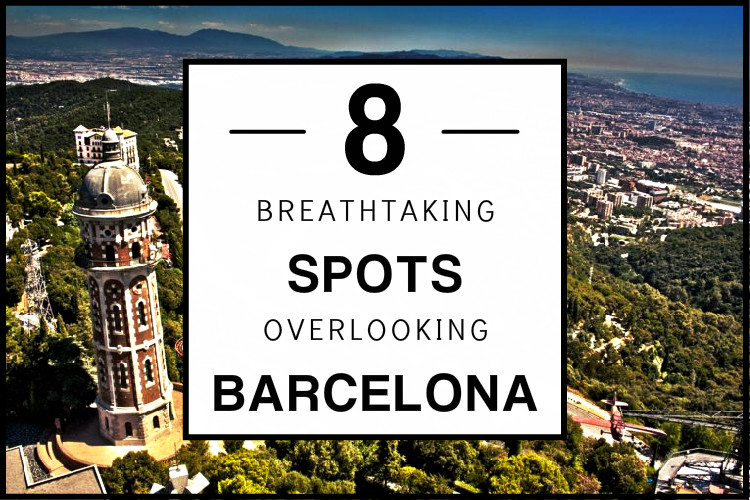 Barcelona is a truly beautiful city. Surrounded by breathtaking mountain regions, the gorgeous coastline, rolling hills and of course, the diverse architecture. It can be difficult to take it all in in a short amount of time, especially from the ground! That’s why we have put together a list of locations around Barcelona where you can get the best views overlooking the city at all different angles. So check it out and enjoy!

This extremely historically relevant location in Barcelona offers one of the best views of the cityscape. The Bunker was originally built in defense of Barcelona during the Spanish Civil War and has since been abandoned. Due to its defensive location, the bunker looks over the entirety of the city centre and onto the ocean! The ruins of the old structure now serve as a viewing point for visitors to hangout and enjoy the view.

In a busy city like Barcelona, it’s hard to go anywhere without sharing the experience with a huge crowd of other people. So if you’re looking for a quiet, tranquil location where you can look over the cityscape, head over to the top of Putxet hill to the beautiful Jardins del Turó. This green space is famous for its rare species of foliage and its beautiful scenic layout. But, more importantly, it’s famous for its view of Barcelona!

At the Centre Comercial Arenas de Barcelona you can shop, see a film, grab some dinner and of course, marvel and gorgeous 360º view overlooking Barcelona! The former bullring located just beside Barcelona’s Plaça de Espanya is a hotspot for families and tourists alike to spend their leisure time. There are 6 floors of shopping and cuisine options and even a movie theatre, but the most impressive part is the view of the Palau Nacional and the Montjuïc mountain.

Barcelona is surrounded by many mountains and hills and the tallest by far is called Tibidabo. You’ve probably seen its most famous decoration – the massive cathedral that looks like a Disney castle, perched at the top of the mountain. Tibidabo is also home to Tibidabo Amusement Park which is also located atop the mountain. The summit is easily accessible by a public transport system called the Tramvia Blau.

More often than not, the most recognizable part of the Barceloneta beach, is the famous W Hotel. It seems to sit on the water, glistening in the sunlight. The hotel is the epitome of chic and it will cost you a pretty penny to spend an afternoon or evening in their Eclipse lounge, located 26 floors above the city with an exclusive view of Barcelona. The average cocktail costs 15€ and while you can sign up for their guest list for free, there is no guarantee you’ll get in because paid reservations are given priority.

Montjuïc is one of Barcelona’s mountains located between Plaça Catalunya and the port of Barcelona. The mountain is quite large, and each side offers a different unique view. From this hilltop, visitors can sit in front of the Palau Nacional on the steps of the Palace or on a bench along the ridge of the mountain. From here you can see straight across the city to Barcelona’s tallest mountain – Tibidabo.

Not your average mirador, the Barcelona Teleférico is a great way to see the city from a birds eye view. Teleférico is Spanish for “cableway”, which is essentially a ski-lift. This route takes you from the mountain top of Montjuïc, across the harbor to the port station (or vice versa). It’s a unique mode of transport for those interested in visiting the top of Montjuïc, but not so interested in climbing it!

On the other side of Barcelona’s Montjuïc mountain (the less accessible side) lies the Montjuïc Castle. A defensive fortress built around the 17th century. Its position on the mountain was once strategic, but now it makes a great place to spend the day “above” the city. In addition to visiting the castle and the museum within, visitors are gifted a breathtaking view that stretches from the coastline all the way to Tibidabo and beyond.

[…] perfect location to have the most romantic view of the whole city and go to Bunkers of Carmel. After the war the guns were removed. Only the bunkers where left with […]