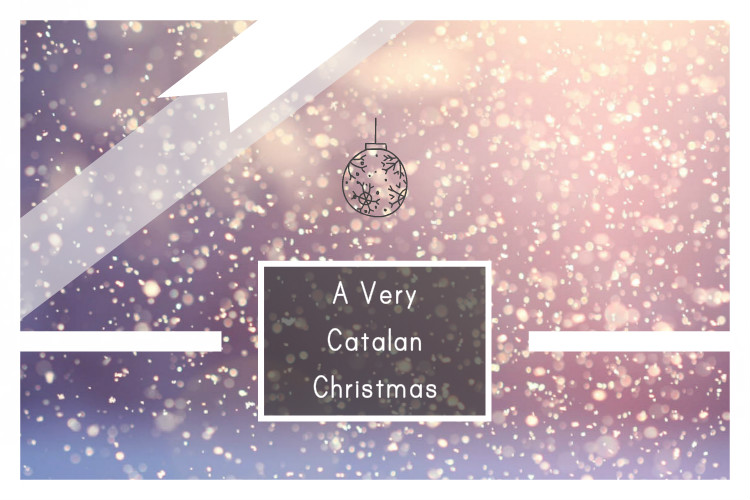 Christmas might be very similar all over the world with its celebrations but a Catalan Christmas is truly something special. It has some unique traditions that will surprise you, charm you and make you say “what the…?” To make the Catalan Christmas season as fun and easy to enjoy as possible, we have listed the most memorable traditions in order of celebration! Get prepared for Christmas, because in Barcelona, the season is filled with must visit markets, traditional Christmas foods to try and much more! 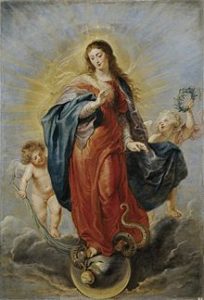 December 8th is the official date which starts the Christmas season. This specific celebration is called the Feast of the Immaculate Conception. It’s an official bank holiday and it’s the time when Catalan families put up their decorations – like miniature of Bethlehem- and eat the first major feast of the season!

Caganer is a small sculpture that is important for the catalan Christmas decorations. It is a man wearing traditional Catalan clothes with his pants down pooping! I know, it sounds strange, really strange. But, Caganer’s history goes back to the 18th century when it poop was considered a symbol of fertile soil and good harvest for the next year!

Cavalcada de Nadal del Pare Noel a Sants is held on Sunday December 11th at 18:00. It starts at Consell de Cent (on  Carrer Creu Coberta 102 Sants-Montjuïc) and strolls through the streets of Santos to Avenida de Madrid. In this parade Santa Claus (Pare Noel) will be accompanied by the celebrities of the neighbourhood – like devils, giants and majorettes. 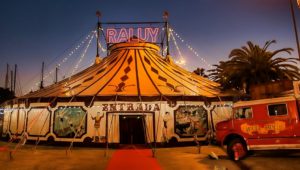 Circ Historic de Raluy is performing at the Port Vell marina from 1st of December until 11th of December. This traditional circus is not only presents an awesome show but they are also a travelling historical museum circus with cool original caravans! No your average Christmas spectacle, which is why it’s just so fun! Ticket prices vary from 15 to 30 euros which you can book here.

Port Aventura turns into a winter wonderland Christmas theme park from the 19th of November until 8th of January. This awesome park is located 1 hour south from Barcelona so gather your friends, hop on a train or rent a car and have a spacial, unforgettable amusement park Christmas day! 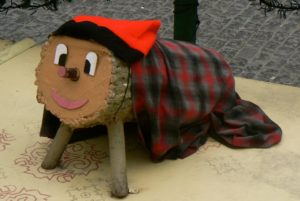 Caga Tió is an odd little tradition in Catalonia that surely needs a little introduction! The locals usually setup their Caga Tió from December 8th until Christmas day. This carving made of wood with a Catalan hat, is given to the Children to take care of until Christmas eve. Kids feed it every day and put it under blanket to keep it warm. Caga tió means poo log in English and on the Christmas day children will sing to the Caga tió and hit it with a stick in hopes that the next morning it will poop out treats and small toys under the blanket! I told you, it’s strange…

On Christmas day, the Spanish celebrate with their traditional Christmas dishes. The starter is a soup called Carn d’Olla that is cooked slowly with a piece of meat that is removed after the cooking. Large pieces of pasta ‘Galets’ are added to the soup and it’s ready to enjoy. The main dish is made from the meat that is cooked with the starter. Along with the meat, most Spanish households eat various tapas with the main course.

Christmas is the time to eat the most expensive ingredients like jamon, eels and langoustines. Desserts include traditional Turrón. In Catalonia the Crema de Catalana Turrón is the most popular and of course the traditional Crema Catalana for dessert. Also Polvorones, sweets made from almond paste, are served at the dessert table! 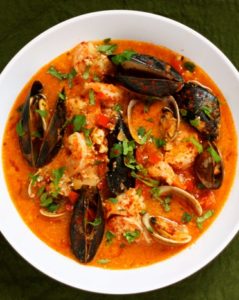 On Christmas day the streets of Barcelona are lively and at noon (12:00) there’s a swimming race in the open water at Port Well! Hundreds of competitors swim 200 meters in the freezing water and some of them are even dressed as Santas. If you are spending Christmas in Barcelona, this 100-year old tradition is worth seeing!

Most Spanish people receive small gifts from Santa Claus but the bigger gifts are given by the Three Kings (explained below). Most of Christmas day is exclusively dedicated to the food that is covering the table. Spaniards eat roasted turkey, tapas, salads, asparagus and seafood like zarzuela; a seafood stew!

Catalans are the masters of saving food! Leftover food from Christmas dinners are cooked inside of delicious cannelloni on December 28th, also known as the Feast of San Esteban, which is celebrated exclusively in Catalonia!

Also,  December 28th is a day quite similar to April fool’s day and Spaniards take it quite seriously. Once there was printed in the newspaper that Spanish king has married Madonna. This day is dedicated to practical jokes and is named Feast of Los Santos Inocentes.

Feast of the Three Kings

Three Kings is a very serious day to Spanish people. In fact, this day is more similar the Christmas day many of us know. The Three Kings are the men who brought gold, frankincense and myrrh to baby Jesus for his birthday. It take places on Janurary 6th. The Center of Barcelona is filled with crowds to see the Three Kings Parade, where sweets are distributed! This parade is held on the 5th of January, 1 day before the day itself. On the morning of the 6th,  Spanish children receive their gifts and it is considered the final day of Christmas celebrations.