When it comes to football, Spain can proudly say that it’s home to the best teams in the world. From total trophies won, to hugely valuable players – Spain’s got the best of the best. One of Spain’s top teams and half of the famous El Clásico rivalry, is FC Barcelona! Just as Real Madrid represents Spain’s capital and the mighty royal reputation the city has, Barça represents Catalonian pride and their political and cultural individualism – which is exactly why their motto is “Més que un club” (more than a club). The team has 24 La Liga and 28 Copa del Rey wins, 5 UEFA titles, 5 Super Cups and so much more. They are the second most valuable team in the game and has one of the biggest international followings in the world! 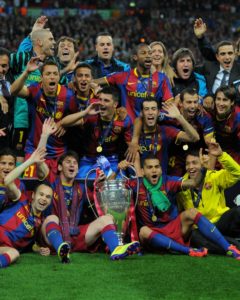 Barça was formed in 1899 by an ambitious Swiss gentleman named Hans Gamper, who posted a simple advertisement in the paper about opening a football club for fun. 11 people responded to his advert and on November 29th, 1899 at the Gimnasio Solé, the Futbol Club (FC) Barcelona was born! The team quickly rose in popularity and skill as they began competing in several regional and national leagues. Even though they had some financial difficulty at first, Gamper eventually rose the teams esteem when he acquired a stadium and steered them to financial stability. One thing that gave rise to the team’s reputation as “a team for the people”, was when they held a contest for the official team logo and crest. The contest was won by a lad named Carles Comamala and his design still represents the team today! Continuing in their mission to create a Catalan identity, FC Barcelona changed its official language to Catalan and allowed the people of Catalonia to help fund the team, making it publicly supported. The club was directly involved in the resistance of the dictator Rivera, and the fight for freedom during the civil war – which was and still is a very important time in Catalan history that we can not do justice to by trying to cover in this article.

But today, the team still is still seen as a symbol of Catalan politics but their focus is on the great game of futbol! FC has been home to some of the biggest names in the game including the legendary player Lionel Messi, Neymar, Andres Iniesta, Xavi, Ronaldinho, Maradona, Ladislao Kubala and many more from both past a present. They also have a beautiful Stadium called Camp Nou where visitors can take a tour and check out where the famous players spend their days! If you’d like to buy tickets to go to the stadium its pretty easy to sort out – for stadium tours you can buy online or at the stadium ticket office & to watch a game you can also book online or at the ticket office