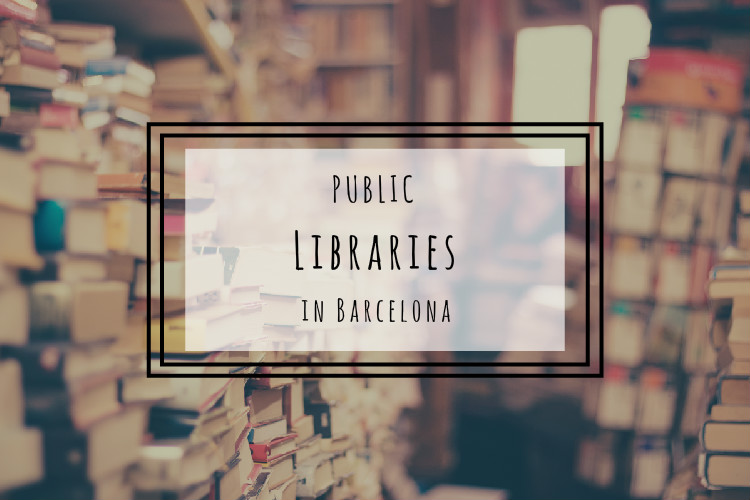 Whether you’re studying, working on a project or preparing something for work, chances are you’ll need a quiet space to get it all done. While some people prefer working from home or heading to the nearest cafe, there is still a great amount of people out there who prefer the classic library scene. The public library system in Barcelona is quite easy to navigate – obtaining a library card is free and the book lending systems are relatively the same (you can take a book out for 3 weeks) and they even have laptop lending now as well! For all of you library lovers out there we have created a basic list of public libraries in Barcelona’s central areas! There are around 60 public libraries in the city – about 2 or 4 in each barrio – so we stuck with the most central and easy-to-get-to parts of the city! Enjoy!

In the central hub of Old Barcelona lies Ciutat Vella. This region of the city is where all the action is! As the oldest part of the city, this neighbourhood has some pretty classy looking libraries! You’ll find 4 public libraries here, spread across the barrio. Those libraries include: Biblioteca Francesca Bonnemaison, Biblioteca Sant Pau i Santa Creu, Biblioteca Gòtic – Andreu Nin and Biblioteca Barceloneta – La Fraternitat.

The barrio of Sant Martí is located in the eastern part of the city, along the coast just north of Barcelonetta. It’s the second most populated neighbourhood of Barcelona. There are 5 public libraries here, all of which are of a modern style and quite large! The libraries you’ll find are: Biblioteca Xavier Benguerel, Biblioteca Poblenou – Manuel Arranz, Biblioteca Camp de l’Arpa – Caterina Albert, Biblioteca Sant Martí de Provençals and Biblioteca Ramon d Alòs-Moner.

Eixample is that massive neighbourhood with grid-like streets that all look the same! It’s mostly considered a suburban area, with some major commercial streets – like Passeig de Gràcia intercepting throughout. There are 6 public libraries in Eixample, all quite spread out from one another. Those libraries are: Biblioteca Sant Antoni – Joan Oliver, Biblioteca Joan Miró, Biblioteca Sofia Barat, Biblioteca Fort Pienc, Biblioteca Sagrada Família-Josep M. Ainaud de Lasarte and Biblioteca Esquerra de l’Eixample – Agustí Centelles.

The unique and funky neighbourhood of Gràcia is located northwest of Eixample. If you’ve been there before you probably noticed it, it feels like a small city within a city! That’s because it was an independent town once upon a time! There are only 3 public libraries here, which include: Biblioteca Vila de Gràcia, Biblioteca Jaume Fuster and Biblioteca Vallcarca i els Penitents-M. Antonieta Cot.

Barcelona Sants & Montjuïc are two very large regions taken up mostly by a huge mountain. Sants is quite well known as a university region, as one of the largest universities (University of Barcelona) is located here. There are only 3 public libraries here and those are: Biblioteca Francesc Candel, Biblioteca Vapor Vell and Biblioteca Poble Sec-Francesc Boix.

Les Corts in an important neighbourhood if you’re a university student. Many students live here so there is a vast student community! However, it’s not very central. it’s the second farthest neighbourhood on our list and this is most likely why you’ll only find 2 public libraries, spread very far apart from one another. Those libraries include: Biblioteca Can Rosés and Biblioteca Les Corts – Miquel Llongueras.